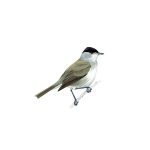 A distinctive greyish warbler, the male has a black cap, and the female a chestnut one. Its delightful fluting song has earned it the name ‘northern nightingale’. Although primarily a summer visitor, birds from Germany and north-east Europe are increasingly spending the winter in the UK. 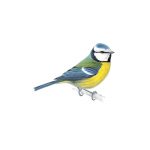 A colourful mix of blue, yellow, white and green makes the blue tit one of our most attractive and most recognisable garden visitors. In winter, family flocks join up with other tits as they search for food. A garden with four or five blue tits at a feeder at any one time may be feeding 20 or more. 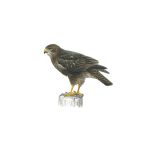 Now the commonest and most widespread UK bird of prey. It is quite large with broad, rounded wings, and a short neck and tail. When gliding and soaring it will often hold its wings in a shallow ‘V’ and the tail is fanned. Birds are variable in colour from all dark brown to much paler variations, all have dark wingtips and a finely barred tail. Their plaintive mewing call could be mistaken for a cat. 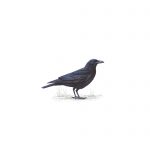 The all-black carrion crow is one of the cleverest, most adaptable of our birds. It is often quite fearless, although it can be wary of man. They are fairly solitary, usually found alone or in pairs. The closely related hooded crow has recently been split as a separate species. Carrion crows will come to gardens for food and although often cautious initially, they soon learn when it is safe, and will return repeatedly to take advantage of whatever is on offer. 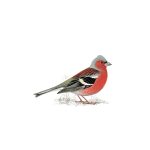 The chaffinch is the UK’s second commonest breeding bird, and is arguably the most colourful of the UK’s finches. Its patterned plumage helps it to blend in when feeding on the ground and it becomes most obvious when it flies, revealing a flash of white on the wings and white outer tail feathers. It does not feed openly on bird feeders – it prefers to hop about under the bird table or under the hedge. You’ll usually hear chaffinches before you see them, with their loud song and varied calls.

A small olive-brown warbler which actively flits through trees and shrubs, with a distinctive tail-wagging movement. Less bright than the similar willow warbler and readily distinguished by its song, from where it gets its name. Picks insects from trees and also flies out to snap them up in flight. 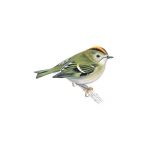 With the firecrest, the goldcrest is the UK’s smallest bird. They’re dull greyish-green with a pale belly and a black and yellow stripe on their heads, which has an orange centre in males. Their thin beak is ideally suited for picking insects out from between pine needles. 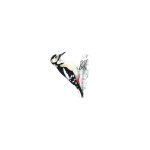 About blackbird-sized and striking black-and-white. It has a very distinctive bouncing flight and spends most of its time clinging to tree trunks and branches, often trying to hide on the side away from the observer. Its presence is often announced by its loud call or by its distinctive spring ‘drumming’ display. The male has a distinctive red patch on the back of the head and young birds have a red crown. 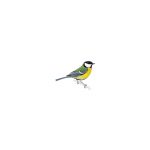 The largest UK tit – green and yellow with a striking glossy black head with white cheeks and a distinctive two-syllable song. It is a woodland bird which has readily adapted to man-made habitats to become a familiar garden visitor. It can be quite aggressive at a birdtable, fighting off smaller tits. In winter it joins with blue tits and others to form roaming flocks which scour gardens and countryside for food. 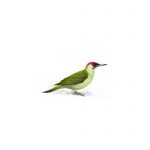 The green woodpecker is the largest of the three woodpeckers that breed in Britain. It has a heavy-looking body, short tail and a strong, long bill. It is green on its upperparts with a paler belly, bright yellow rump and red on the top of its head. The black ‘moustache’ has a red centre in males. They have an undulating flight and a loud, laughing call. 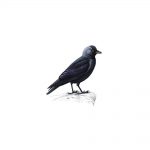 This is a small, black crow with a distinctive silvery sheen to the back of its head. The pale eyes are also noticeable. 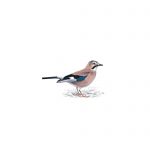 Although they are the most colourful members of the crow family, jays are actually quite difficult to see. They are shy woodland birds, rarely moving far from cover. The screaming call usually lets you know a jay is about and it is usually given when a bird is on the move, so watch for a bird flying between the trees with its distinctive flash of white on the rump. Jays are famous for their acorn feeding habits and in the autumn you may see them burying acorns for retrieving later in the winter. 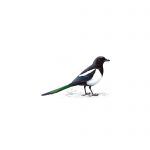 With its noisy chattering, black-and-white plumage and long tail, there is nothing else quite like the magpie in the UK. When seen close-up its black plumage takes on an altogether more colourful hue with a purplish-blue iridescent sheen to the wing feathers, and a green gloss to the tail. Magpies seem to be jacks of all trades – scavengers, predators and pest-destroyers, their challenging, almost arrogant attitude has won them few friends. Non-breeding birds will gather together in flocks. 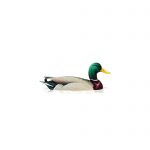 The mallard is a large and heavy looking duck. It has a long body and a long and broad bill. The male has a dark green head, a yellow bill, is mainly purple-brown on the breast and grey on the body. The female is mainly brown with an orange bill. It breeds in all parts of the UK in summer and winter, wherever there are suitable wetland habitats, although it is scarcer in upland areas. Mallards in the UK may be resident breeders or migrants – many of the birds that breed in Iceland and northern Europe spend the winter here. 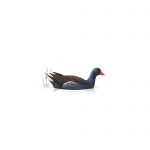 Moorhens are blackish with a red and yellow beak and long, green legs. Seen closer-up, they have a dark brown back and wings and a more bluish-black belly, with white stripes on the flanks. 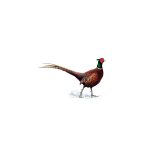 A large, long-tailed gamebird. Males have rich chestnut, golden-brown and black markings on body and tail, with a dark green head and red face wattling. Females are mottled with paler brown and black. They were introduced to the UK long ago and more recent introductions have brought in a variety of races and breeds for sport shooting. 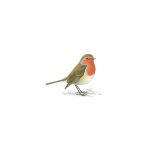 The UK’s favourite bird – with its bright red breast it is familar throughout the year and especially at Christmas! Males and females look identical, and young birds have no red breast and are spotted with golden brown. Robins sing nearly all year round and despite their cute appearance, they are aggressively territorial and are quick to drive away intruders. They will sing at night next to street lights. 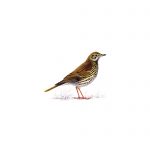 A familiar and popular garden songbird whose numbers are declining seriously, especially on farmland making it a Red List species. Smaller and browner than a mistle thrush with smaller spotting. Its habit of repeating song phrases distinguish it from singing blackbirds. It likes to eat snails which it breaks into by smashing them against a stone with a flick of the head. 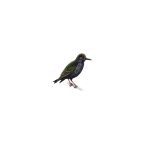 Smaller than blackbirds, with a short tail, pointed head, triangular wings, starlings look black at a distance but when seen closer they are very glossy with a sheen of purples and greens. Their flight is fast and direct and they walk and run confidently on the ground. Noisy and gregarious, starlings spend a lot of the year in flocks. Still one of the commonest of garden birds, its decline elsewhere makes it a Red List species. 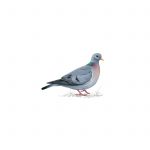 Stock doves are similar in plumage and size to rock doves/feral pigeons. They are largely blue-grey with an attractive iridescent bottle green band on the back of the neck. In flight they show black edges to the wing and two partial black bands near their back. Unlike rock doves/feral pigeons they do not have pale rumps. They are widely distributed in the UK, except for parts of northern Scotland and Ireland, with particularly high densities in the English Midlands and South West. Over half their European population is found in the UK. 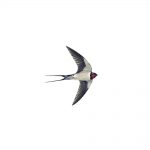 Swallows are small birds with dark, glossy-blue backs, red throats, pale underparts and long tail streamers. They are extremely agile in flight and spend most of their time on the wing. They are widespread breeding birds in the Northern Hemisphere, migrating south in winter. Swallow numbers in the UK have fluctuated over the last 30 years with pronounced regional variation in trends. The species is amber listed due to population declines across Europe. 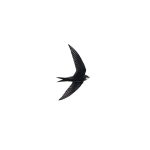 The swift is a medium-sized aerial bird, which is a superb flier. It evens sleeps on the wing! It is plain sooty brown, but in flight against the sky it appears black. It has long, scythe-like wings and a short, forked tail. It is a summer visitor, breeding across the UK, but most numerously in the south and east. It winters in Africa. 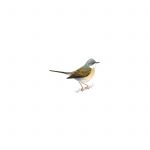 The whitethroat is a medium-sized warbler, about the size of a great tit. It has quite a long tail which it flicks and cocks as it darts rapidly in and out of cover. The male has a grey head, a white throat and a brown back, and is buff underneath. It is a summer visitor and passage migrant, with birds breeding widely, although it avoids urban and mountainous areas. It winters in Africa, south of the Sahara. 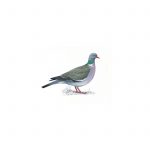 The UK’s largest and commonest pigeon, it is largely grey with a white neck patch and white wing patches, clearly visible in flight. Although shy in the countryside it can be tame and approachable in towns and cities. Its cooing call is a familiar sound in woodlands as is the loud clatter of its wings when it flies away. 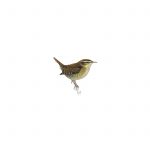 The wren is a tiny brown bird, although it is heavier, less slim, than the even smaller goldcrest. It is dumpy, almost rounded, with a fine bill, quite long legs and toes, very short round wings and a short, narrow tail which is sometimes cocked up vertically. For such a small bird it has a remarkably loud voice. It is the commonest UK breeding bird, although it suffers declines during prolonged, severely cold winters