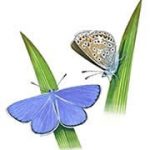 This butterfly is common throughout the UK. There are often two broods, with eggs laid in June, then August and September. Common blue caterpillars hibernate and pupate in April and May giving rise to adults in May and June.

The caterpillars are short, green and furry. They feed on the underside of young leaves, leaving the upper leaf epidermis intact. This creates silvery blotches on the leaves that are easy to spot.

The caterpillars secrete nutrient-containing substances that attract ants. In turn, the ants protect the caterpillar from predators. Ants probably tend the chrysalis too. 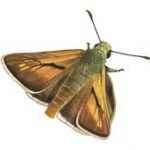 The large skipper is best identified by the obvious thick black line through the centre of its orange upper wings, which can be seen when it is at rest. The undersides of the wings have faint orange spots, giving them a chequered appearance.

This is a common butterfly of summer that is is found where grasses grow tall. Typical sites include meadows, hedgerows, roadside verges, woodland rides and woodland clearings. It can also be found in parks, large gardens and churchyards.

Females lay their eggs in sheltered spots in sunlight, where the grass grows tall. Eggs are laid singly on the underside of the leaf and can be found in July and August. They are white when first laid, gradually becoming orange. The caterpillars feed on coarse grasses, particularly cock’s-foot. 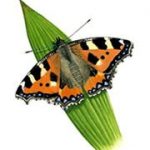 One of the commoner garden butterflies throughout the UK, the small tortoiseshell is bright orange and black with a row of blue crescents around the wing edges. Underneath, they are camouflaged dark grey and brown. Adults emerge from hibernation on the first warm spring days and look for mates.

Females usually lay their eggs on tender, young stinging nettles in batches of 60 to 100. Caterpillars hatch after about 10 days and spin a dense web over the plant’s growing tip. The caterpillars live communally for most of their lives, dispersing to pupate. Adults often hibernate in houses, outbuildings and sheds.

Caterpillars are bristly and black with two discontinuous yellow lines along their sides. Their bright colours warn predators that they are poisonous. 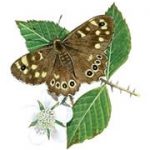 You can often see males perched in pools of sunlight or fluttering upwards in a band of sunshine in an otherwise shady woodland ride. Females lay single, white eggs on a variety of grasses along the sunny edges of woods, rides and hedges.

The caterpillars are bright green with faint, darker green and yellow stripes. They pupate after about 10 days, with the chrysalises suspended beneath grass blades. Unlike any other British butterfly, speckled woods are able to hibernate as either a caterpillar or chrysalis. 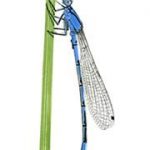 They appear to drift through the air, and they snatch their prey from vegetation. Damselflies rest with their wings folded lengthways along their body.

During mating, the male clasps the female by her neck while she bends her body around to his reproductive organs – this is called a mating wheel. The pair flies together over the water and eggs are laid within a suitable plant, just below the surface.

The eggs hatch and the larvae, called nymphs, live in the water. Nymphs climb out of the water up a suitable stem to moult into damselflies. 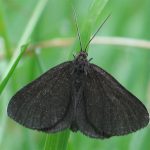 This distinctive moth has sometimes been mistaken for the Small Blue butterfly. It rarely varies in colour but may become browner with wear. This moth is usually very active by day, especially in sunshine.